RN 3000 is a powerful bicycle light that utilizes two 21700 integratedbatteries with 10,000mAh super high capacity. It is equipped with twosuper bright and power efficient LEDs, with a maximum verified output of3,000 lumens. Maximum runtime up to 62 hours, best choice forlong-distance cycling and extreme challenges. Anti-glare lens design forroad cyclists where the beam softens to avoid blinding oncomingmotorists. Side lighting for better side visibility. 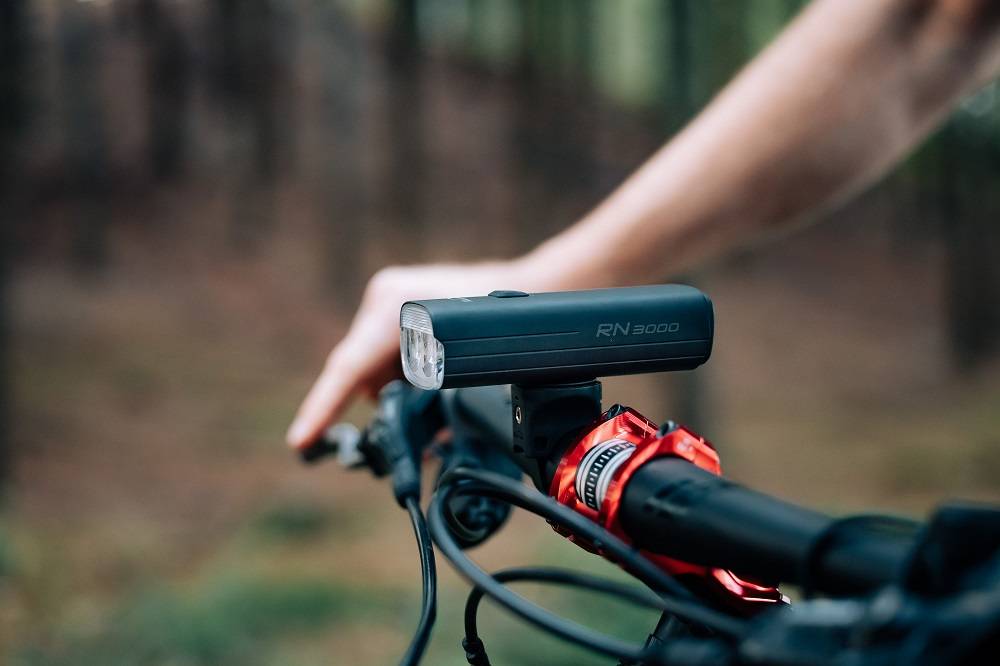 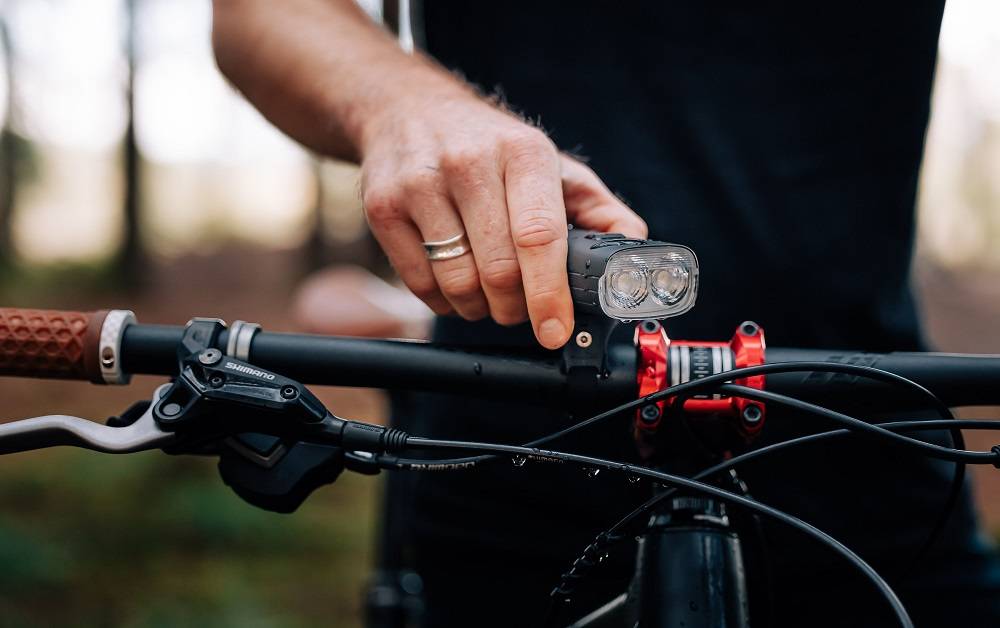 ● Side lighting for better side visibility.

● Universal Garmin quad lock style mount, easy to put on and take off 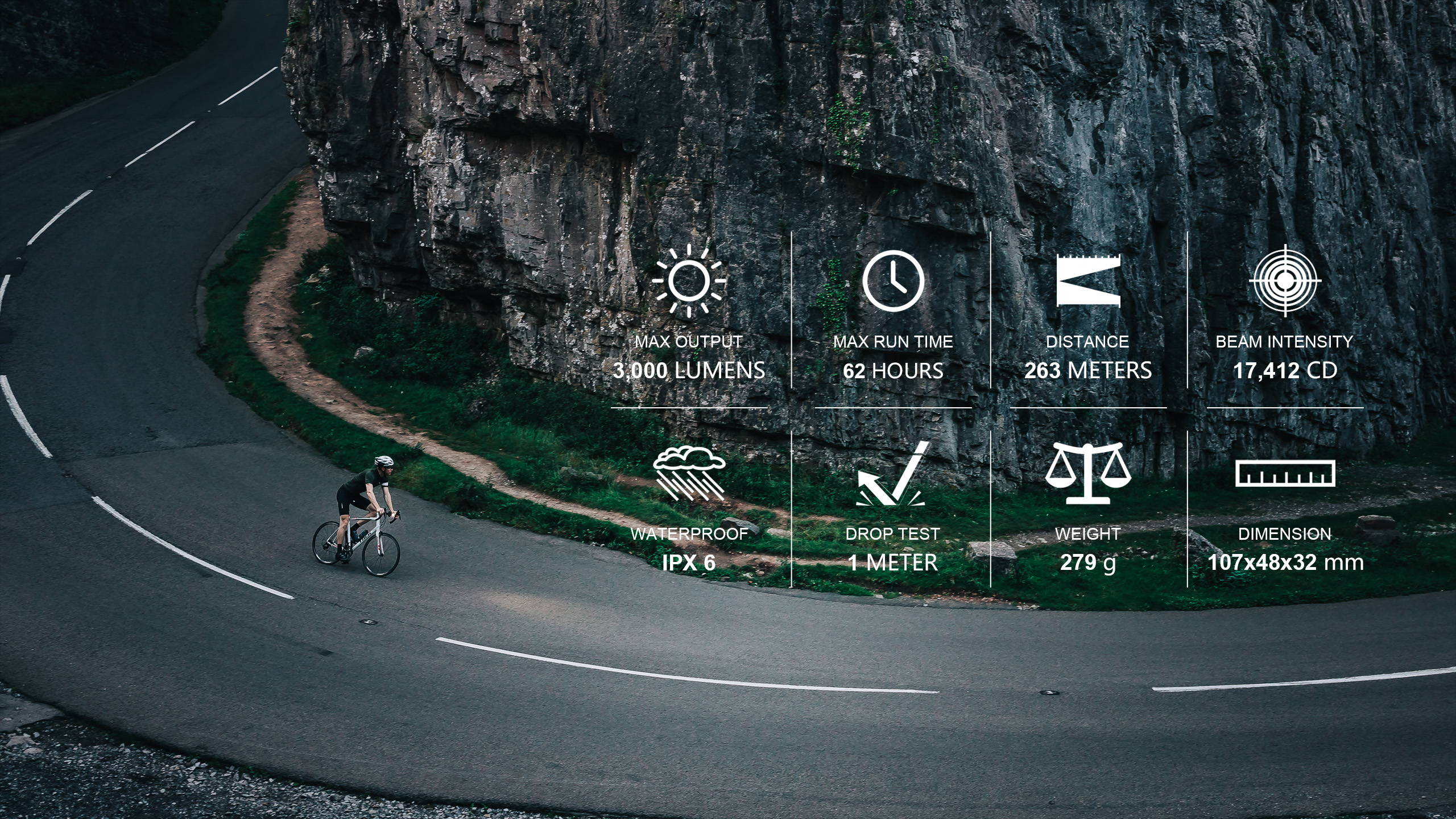 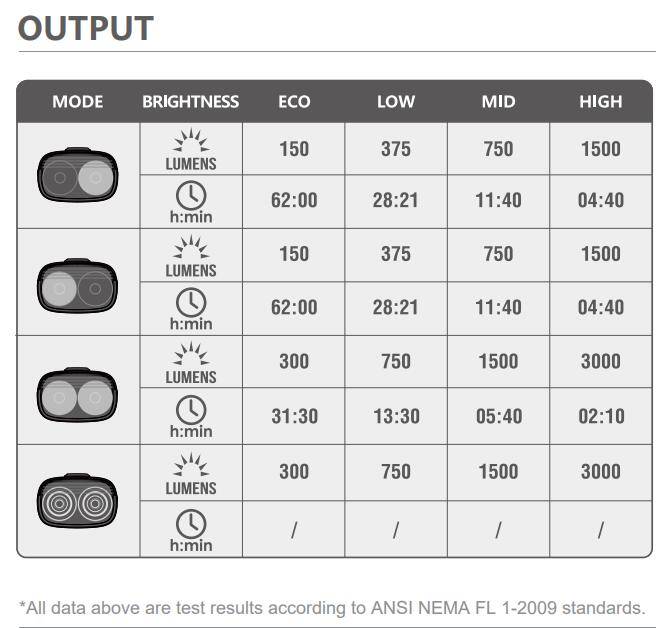 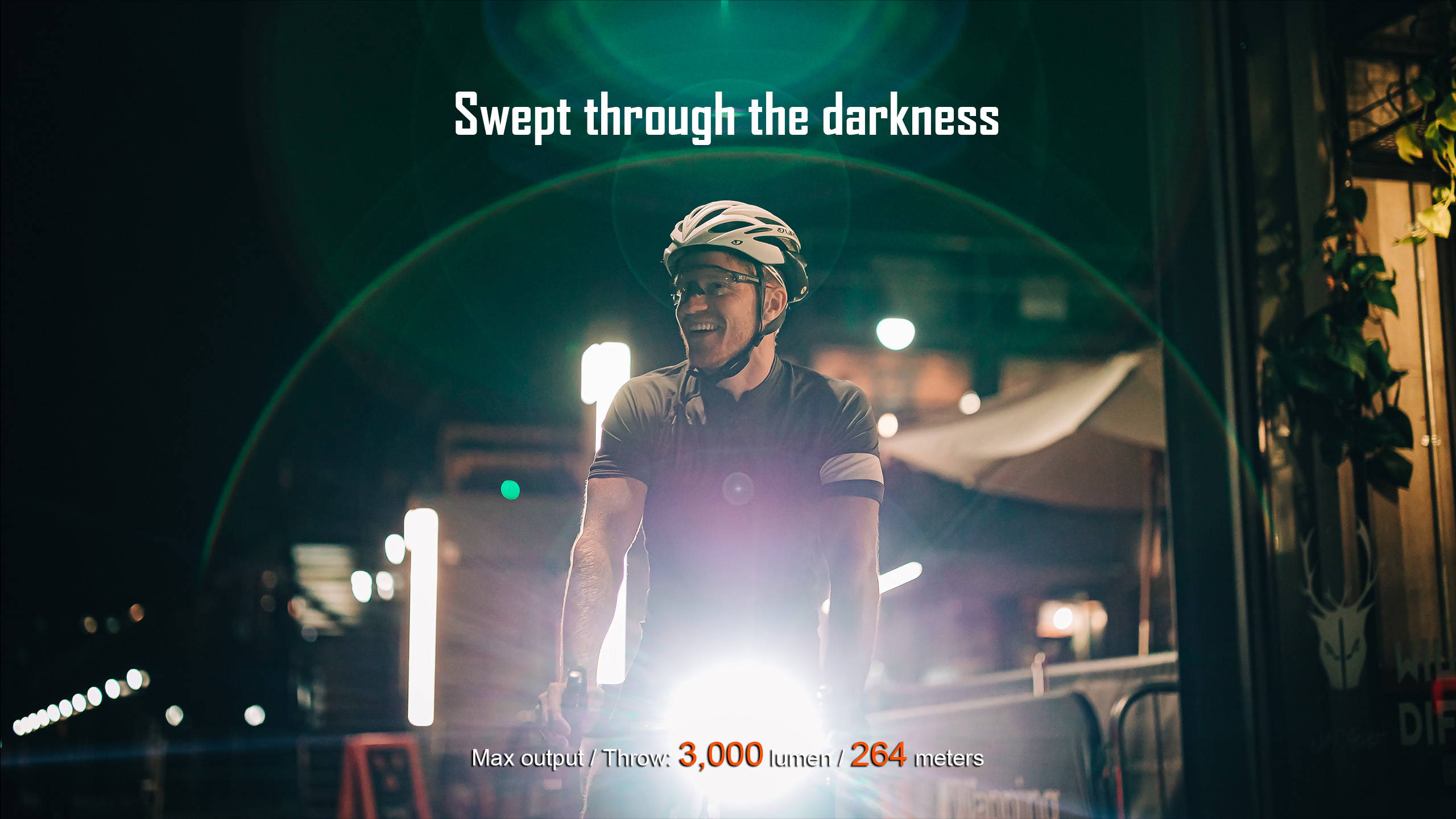 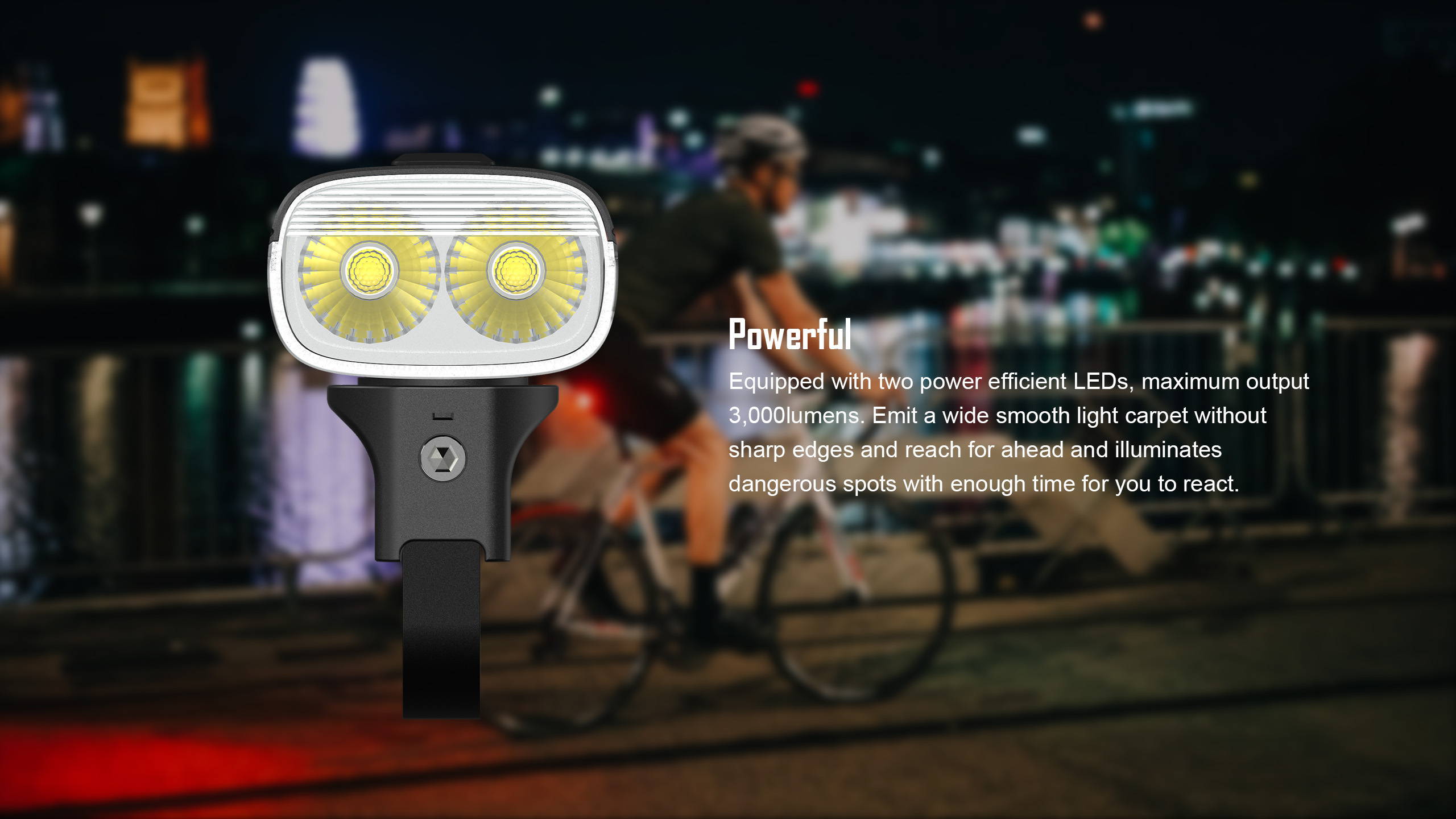 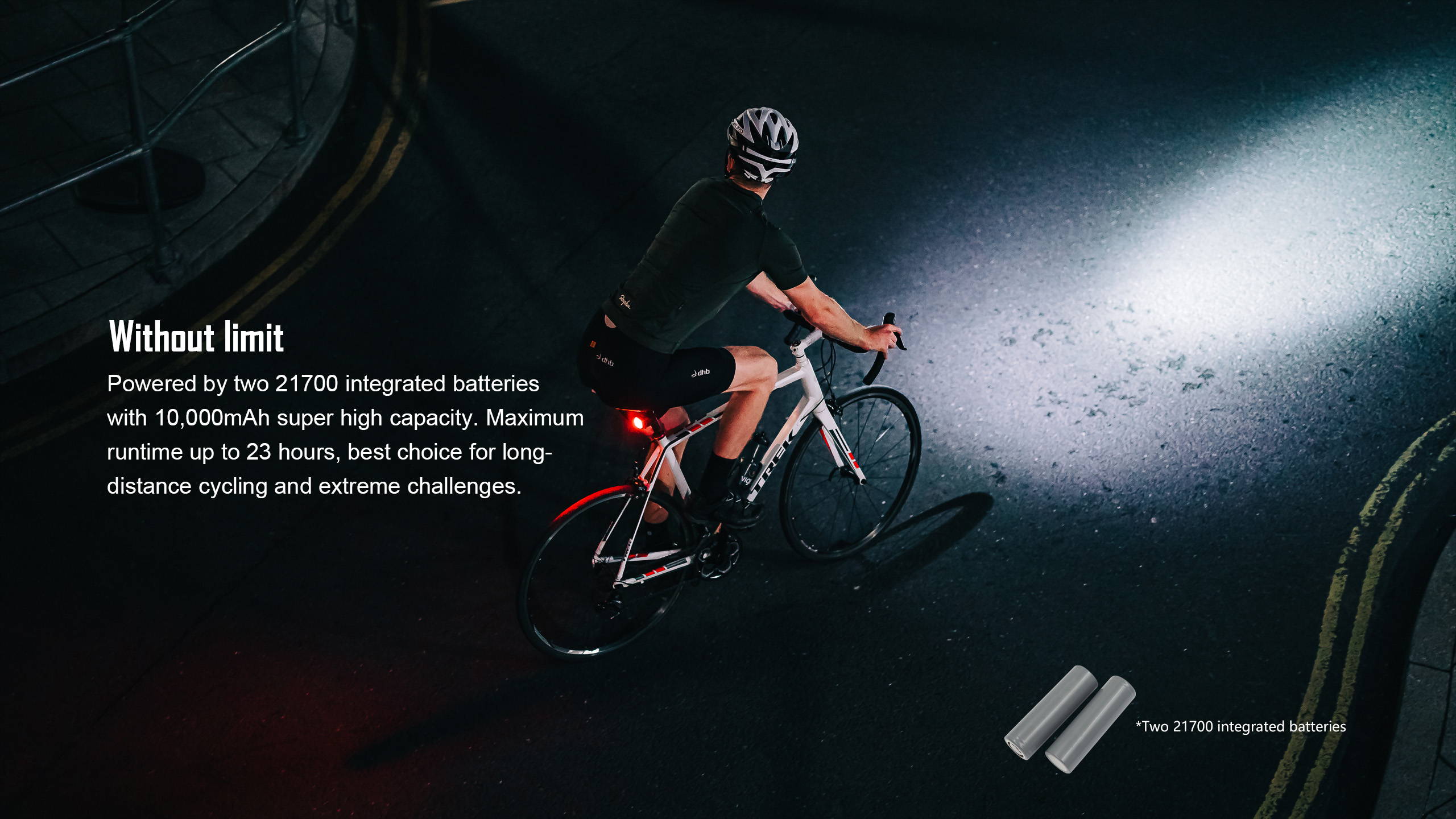 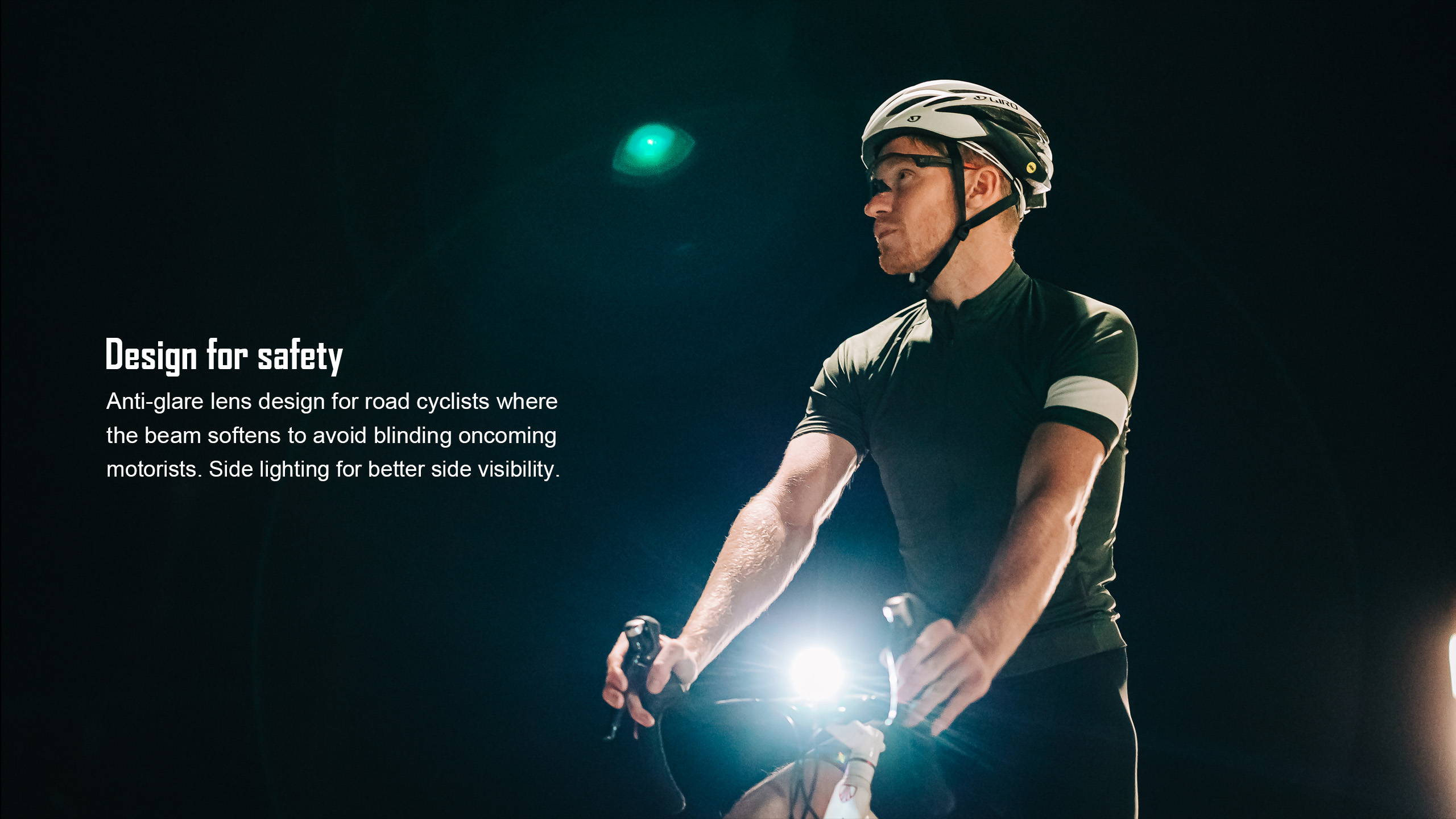 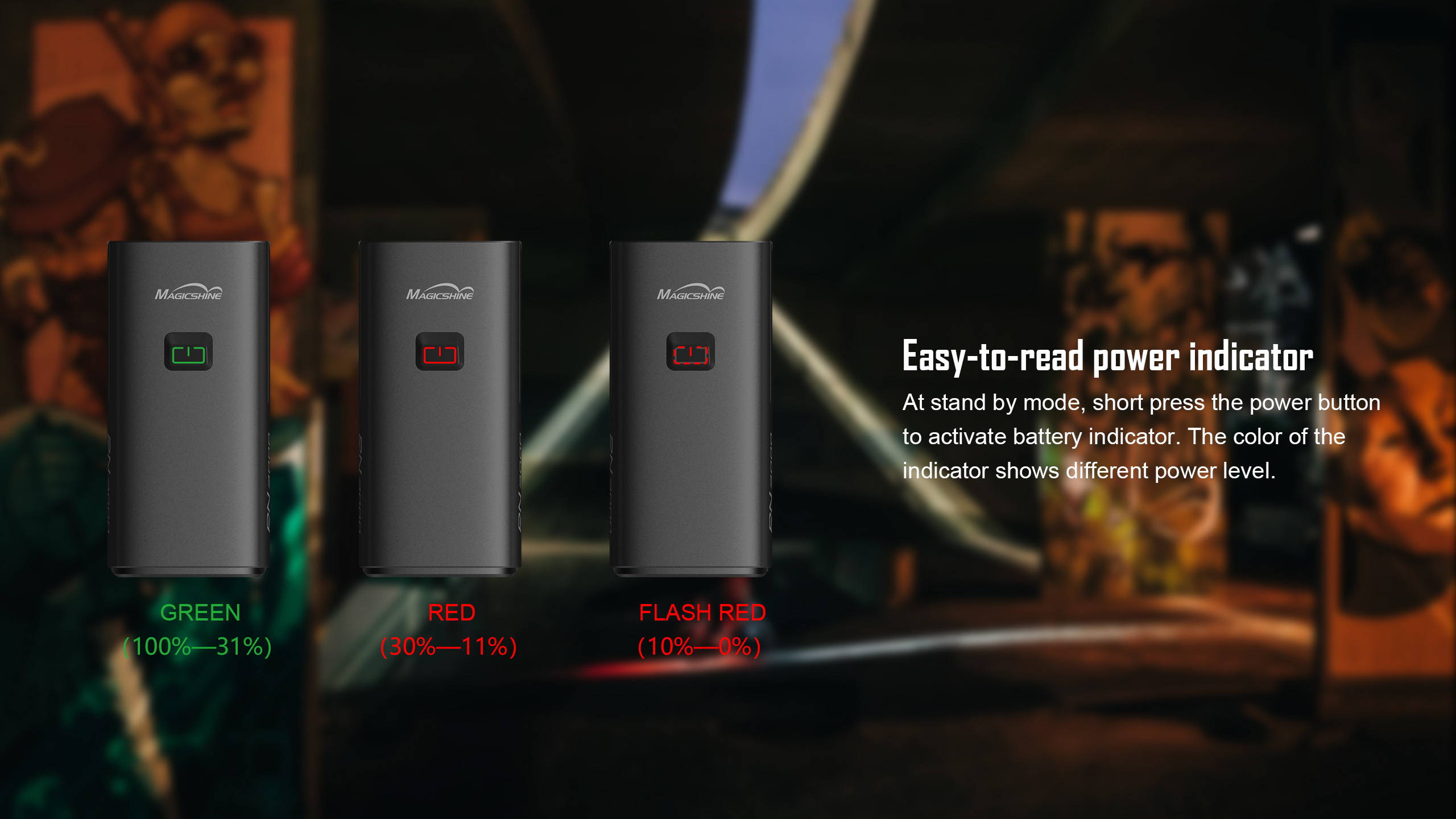 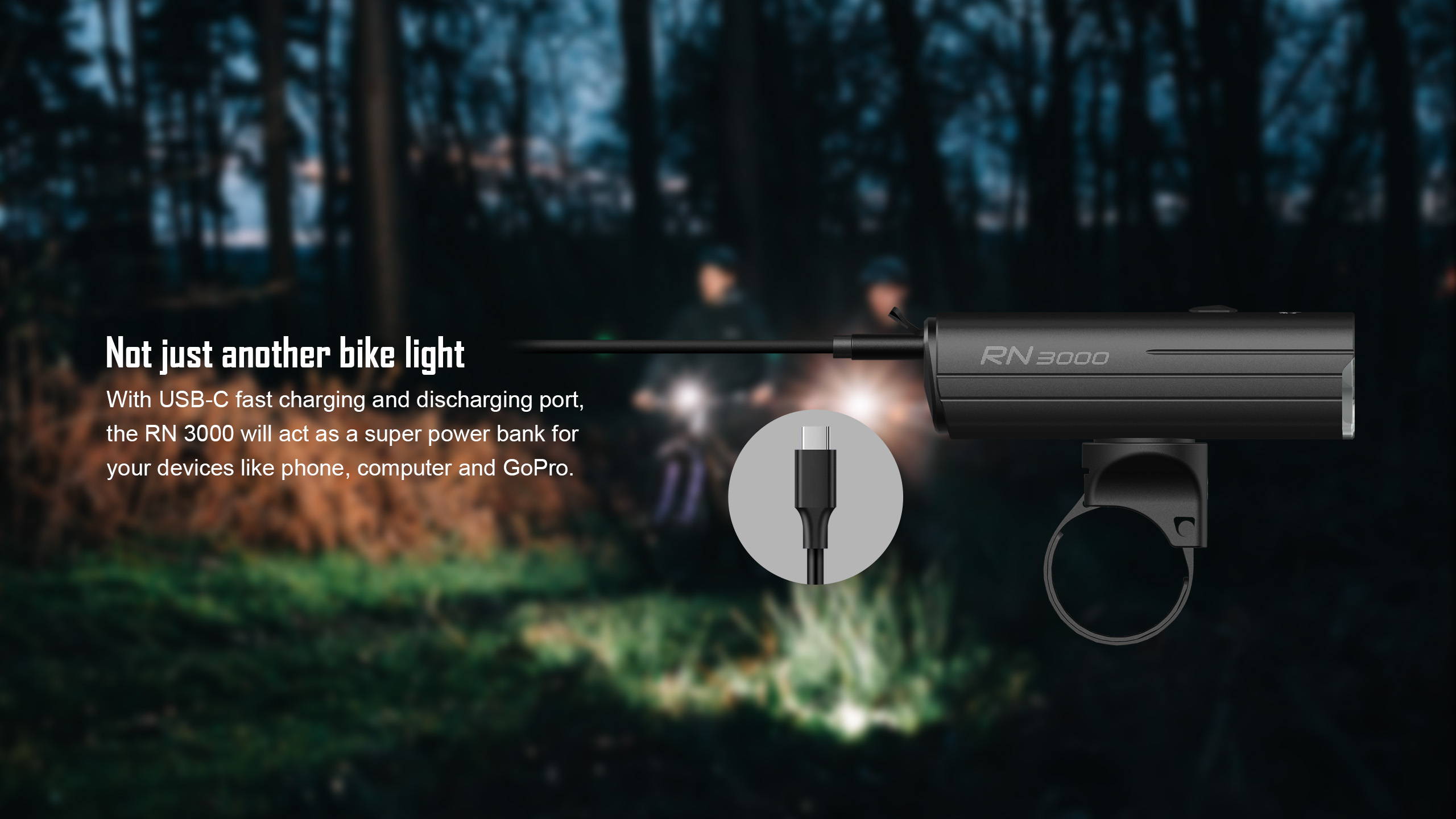 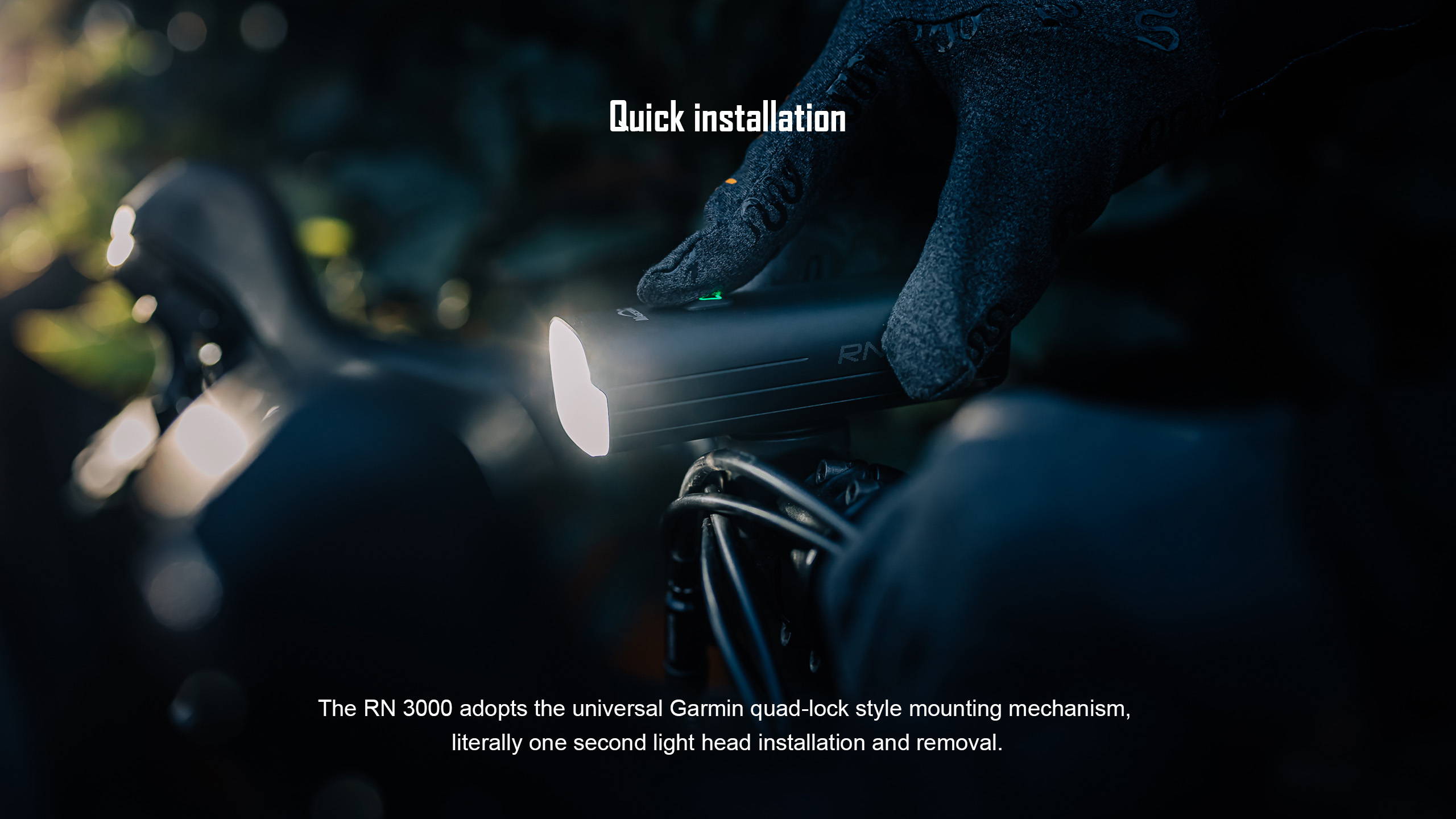 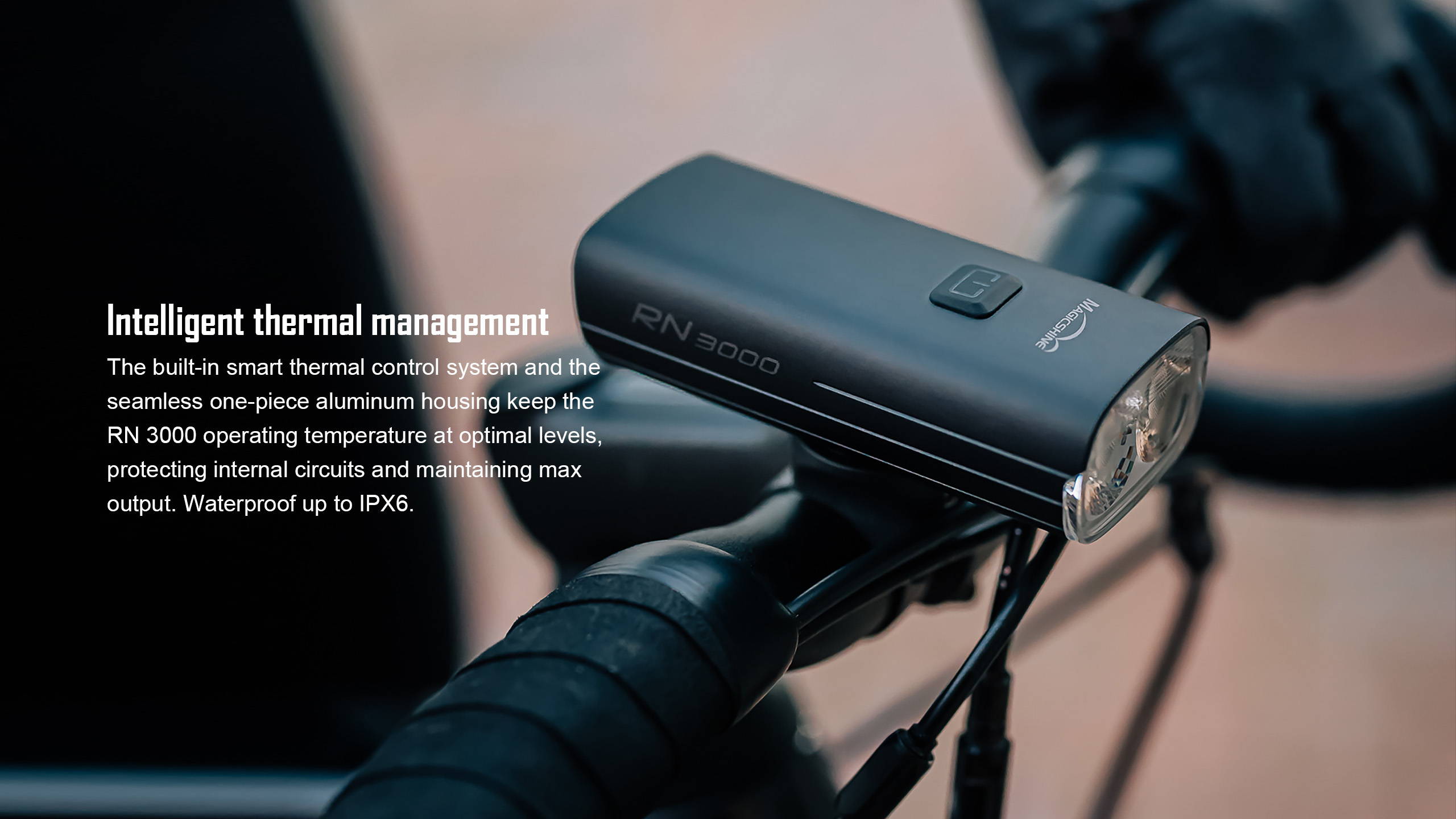 If there is one thing you can count on from advancements in Lithium ion and LED technology is it brings down the cost of batteries and increases light output. Case in point, the new $159.99 Magicshine RN3000 bike front headlight which is the topic of this review. As the product name hints, the RN 3000 is capable of an impressive 3000 lumen output. Although that isn’t the brightest light Magicshine offers (the 8000 lumen Monteer 8000S takes that title), it’s the brightest all-in-one light Magicshine has offered to date. The RN 3000 is able to achieve that output thanks to a 10,000 mAh battery capacity from two integrated 21700 Li-ion cells. Dual Luminus LEDs provide a uniform and wide beam for road cycling and off-road use. Modern touches such as USB Type-C charging, powerbank functionality, and quarter-turn Garmin style mount help offset the premium price of the light.

The Magicshine RN 3000 combines an impressive 10,000 mAh USB Type-C rechargeable battery with a bright 3000 lumen output for road or mountain bike use.

The Magicshine RN 3000 comes in a sleek black cardboard box with Magicshine’s distinctive black and orange graphics on it. Inside the box you’ll find:

You’re likely to receive the RN 3000 in the “lockout mode” which means the power button will flash red with any button press. To unlock the light, simply hold the power button down until it stops flashing.

As with most of Magicshine’s recent front lights, the RN 3000 utilizes a universal Garmin quarter turn style mount. The simple design utilizes a circular base with two tabs to securely mount on a variety of available accessories on the market. It’s a secure mount style that works on or off-road and a big improvement over proprietary mounts other companies use. The RN 3000 also includes a simple handlebar mount with multiple strap lengths to accommodate aero bars and different diameter round bars. It’s the same mount that comes with the Monteer and MJ-900 series of lights that requires an allen wrench to install. We highly recommend using an out-front mount such as the Magicshine TTA or other Garmin compatible mounts on the market instead of the included mount to place the light directly in front of your handlebars.

We were quite surprised by the size of the RN 3000 when we first took it out of the box. Also, wfile videos and or photos of the light make it look visually identical to the Allty or RN 1200 lights with its black rectangular profile, rounded corners, and aluminium housing, in person, the RN 3000 is quite large so as to house the high-capacity 21700 Li-on batteries. The 10,000 mAh battery capacity is on par with the MJ-6118 battery pack that comes with the 4500 lumen MJ-906S wired light. Thanks to the all-in-one commuter style design of the RN 3000, you don’t have to worry about mounting bulky battery packs on your bike. Recharging the light is also easy with the rear mounted USB Type-C port that can also be used to recharge other devices.

Branding is limited to the usual Magicshine logo on the top of the light and the product name printed on the sides. Small grooves along the sides break up the otherwise smooth aluminium body and help with heat dissipation. The dual LED design utilizes a simple flat lens with simple anti-glare horizontal deflectors at the top to focus the light output downward.  it helps reduce glare and is something Magicshine has incorporated in other lights such as the MJ-902S and Allty series. Unfortunately there are no DRLs with the RN 3000 which is a very useful feature for daytime riding.

The RN 3000 utilizes the familiar illuminated single top-mounted button interface found in the other Allty and MJ-90X series of lights. Although we would have liked to see the dual button interface of the recently introduced Magicshine Ray 2600, the interface is relatively straight forward. Pressing the button while the light is off shows a three-level battery indicator that lights up green, red, or flashing red. The RN 3000 also has the lockout mode option which was recently introduced in the Ray 2600 that prevents the light from accidentally being turned on while in storage or transport. The feature is accessible by holding the power button with the light off for a few seconds until it flashes or stops flashing.

Otherwise, mode selection is done by a quick double press to cycle through the four available modes: left LED only, right LED only, hybrid (both), and flash. A single press while in any mode cycles through an additional four intensity options: eco, low, medium and high. So there are 16 total modes which is honestly more than most people will ever use. The power button itself is well illuminated and raised from the light housing making it easy to use even with thick gloves on. With the $159.99 retail price of the RN 3000, we’re a bit disappointed by the lack of a run-time indicator screen (something the previous $149.99 Allty 2000 offered).

The RN 3000 has a dual LED design and what we think is an excessive 16 total output modes to choose from. There are four primary beam modes: left LED only, right LED only, hybrid, and flash. Within each mode there are four brightness options from the high-run-time and low-lumen eco mode all the way to the high mode. With the integrated horizontal beam deflector, the beam pattern of the RN 3000 has a “dual beam” appearance that is similar to the Fenix BC21R and other Magicshine Allty lights. It isn’t a true beam cutoff, but a soft beam cutoff that helps focus light on the ground and reduce glare.

Unlike the Magicshine Ray 2600 which has clearly distinguished left and right modes, we found it difficult to tell the different sides apart on the RN 3000. The only difference between the left and right LEDs is the faceted reflector housing of the right LED that helps spread the beam more. On the road, it’s hard to tell the two modes apart as the difference is subtle so the left and right modes can be used interchangeably. We wish Magicshine would have eliminated the separate options(left/right) or combined them to reduce the total number modes or made them more distinct. Lumen output ranges from a very dim daytime 150 lumen upto 1500 lumens with 62 to 3.7 hour run-times.

Flash mode is limited to a rather slow on/off pattern and the four different intensities. Lumen output ranges from 300 to 3000 with no published run-times. Although Magicshine doesn’t publish the run-times, you can expect 4+ hour run-times even in the max output mode as flash mode requires significantly less power than constant modes. We found the slow flash pattern less jarring than the erratic flash modes Magicshine offers in their other lights and great for daytime use. We think Magicshine could have simplified the interface by limiting the flash mode to one or two modes with different patterns as the four intensities seem unnecessary. Unless you want to annoy other riders or a neighbor, the 3000 lumen flash mode is something to avoid while riding.

As far as riding with the RN 3000, there is more than enough run-time and output for road cycling or dark mountain biking trails. Eco mode for all the settings is too dim for night time use but can be used for daytime riding to ensure you are more visible. We found ourselves primarily riding in the medium mode on dim trails and high mode on more technical dark roads and trails. The jumps in the lumen output are quite large so it’s easy to tell the difference between modes visually. We think Magicshine could have combined eco/low modes together and offered a medium-high option instead as it would be more useful to have a brighter setting for night time riding.

Overall, we found the Magicshine RN 3000 to be an impressively bright yet compact light. As one of the brightest all-in-one commuter style lights, the 3000 lumen RN 3000 is powerful enough for road cycling or mountain bike use. The integrated 10,000 mAh battery pack means even in the maximum 3000 lumen mode, the run-time is a generous 2.2 hours. It’s clear that Magicshine prioritized run-time and output with the RN 3000 as the light lacks DRLs, ambient light sensors, or run-time displays found in lower-priced and lower-output Magicshine lights. The relatively compact size also makes it perfect for dual light setups although the heavier all-in-one design and lack of remote switch make it less optimal for helmet mounting. If you are looking for a bright bike front light but don’t want to carry bulky wired battery packs or compromise run-time, the RN 3000 is a great option.

1. How to check my order status?

A: After you register on our website, log in from our system, you can check your order status in real time.

A: There are two ways of logistics, express and postal. According to the region, our system will automatically allocate logistics, you can contact us directly if you want to change your shipping method to express. Order inquiry: mkt1@magicshine.com

We will refund the amount to your payment account within 24 hours.

A: For any question on product or availability, please feel free to contact us below:

PS: The order confirmation email will be sent to you after you place your order, maybe you can check it in your spam box.